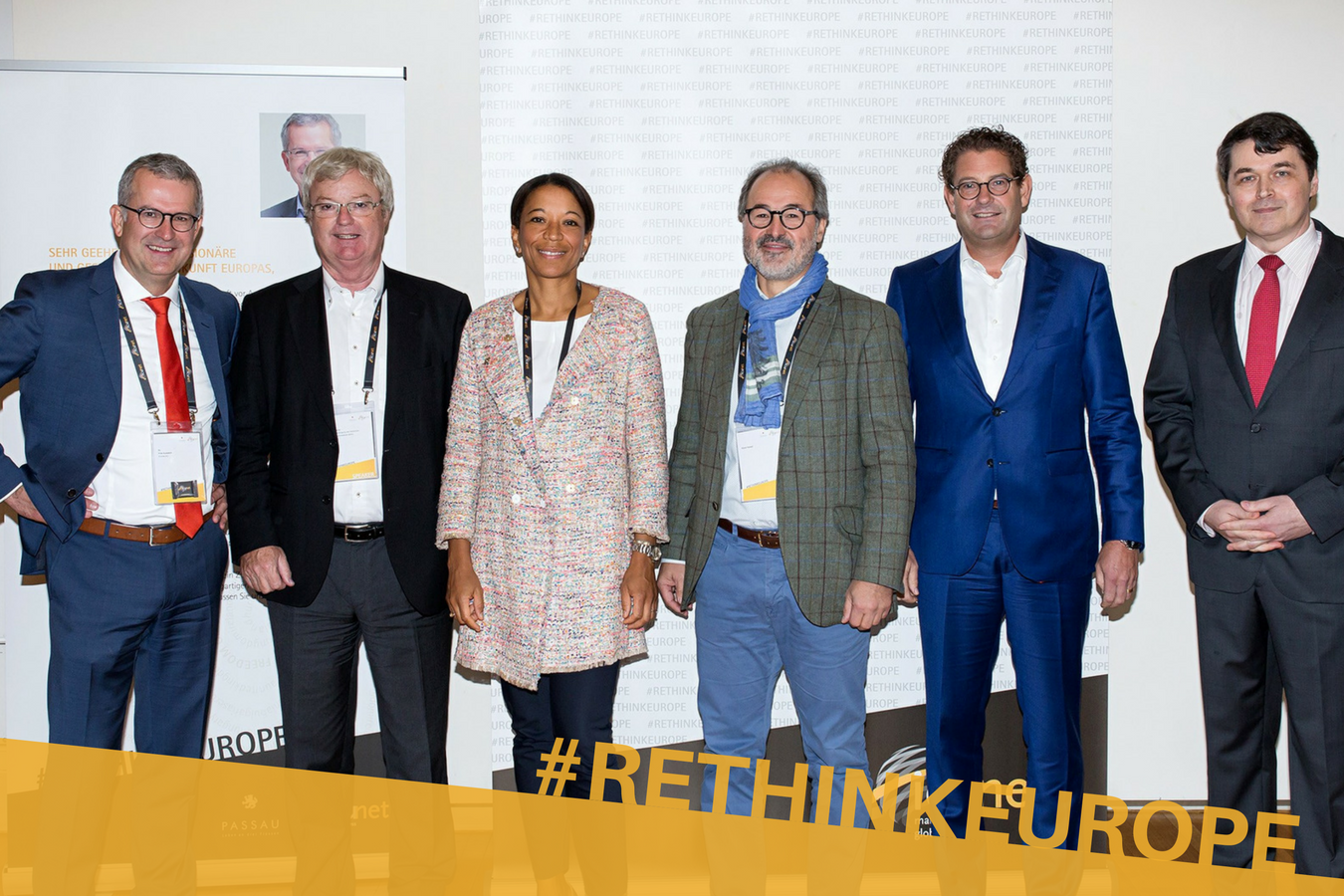 Focusing on the future of Europe together

Sharp analysis and productive discussions, courageous visions and a resounding “yes” to the European project – that was #RETHINKEUROPE 2017

Less than a week after the German Bundestag elections, leading representatives from politics and business came together in Passau to discuss nothing less than the future of Europe. Lively, controversial and driven by a strong conviction for the common European project, the high-ranking participants of the think tank ReThink Europe addressed the pressing problems of contemporary Europe over the course of two days – transforming the city of three rivers into the scene of exciting debates and creative discourses on the Europe of tomorrow.

More than 30 renowned speakers from politics and business attended the event in Passau. Together with the congress’s international audience, they analyzed, discussed and classified current challenges for Europe in several discussion forums. The topics covered included the current political situation in the various member states, the role of neighboring states Germany and Austria as a power plant at the heart of Europe, the situation on the European labor market for Generation Y and the difficult relationship between the EU and Turkey.

In view of the growing strength of right-wing populist parties in many European countries, the original European idea and its valuable achievements – namely its powerful economic and political effects and the peace it has managed to sustain over the last 70+ years – must be maintained and preserved according to the unanimous opinion of the participants.

This, however, seems all but certain these days as the European idea has had to contend with strong opposition and occasionally massive attacks in 2017. While globalization continues to advance, the leaders from politics and business at the congress also see a trend towards separation and an emphasis on distinctions rather than common bonds – as seen with the Brexit and Catalonia referendums. Another immense challenge is posed by the latent fear of foreigners, which has been considerably intensified by the refugee crisis and is being politically exploited in several European countries. The implementation of the European idea in the education sector is therefore seen as all the more crucial while universities and companies were recognized as unifying forces that can combat social apathy.

It is difficult to imagine any place better suited for the exchange of leading entrepreneurs from Germany and Austria than the border town of Passau. Connected by language and culture, the neighbors represent a potential economic “power plant” at the heart of Europe. But during the discussion involving representatives from the two countries, the tension between the importance of national sovereignty on the one hand and European membership on the other became clear – a tension that has been interpreted by other member states as detrimental for the EU. Among other things, the panel considered the refugee crisis and its consequences. It was agreed that this topic will have a decisive influence on the further development of Europe. Following the initial shock from the crisis, it is now important to find concrete solutions to cope with the new situation, said Dr. Wolfgang Eder, CEO of voestalpine AG. Here, he believes that businesses, in particular, should lead by example. As regards the cohesion of the member states in the face of this challenge, the opinion was unanimous: “Either we are a European community with a certain minimum standard of solidarity, or we need to redefine Europe. It cannot be that a country enjoys all the benefits of the EU, but does not make its own contribution.”

A thriving and robust European labor market is crucial to Europe’s progress – and this area too is facing major challenges. Globalization, digitization, immigration – these issues were at the heart of the extensive panel that brought together young professionals from Generation Y and senior representatives from large companies.

Well-educated, interdisciplinary, highly adaptable and often with an international background, Generation Y enriches the European labor market with numerous competencies. But their demands on companies have also become more multifaceted. They challenge hierarchies, seek new forms of work and, finally, desire a spectrum of tasks that has meaning beyond the job and can have a global impact. “The world has become enormously complex. It is no longer possible to manage employees at a company the way we did 30 years ago,” says Janina Kugel, Siemens AG’s Chief Human Resources Officer, adding that companies can only cope with digitization if they think in terms of partnerships. European companies must play an active role in shaping digitization and globalization; this requires new strategies and an intensive examination of the needs of young workers in addition to intelligently managed immigration policies in view of the clear shortage of skilled workers. Kugel notes: “The great challenge is to approach this issue, not just from a European perspective, but a global one. Germany will not be able to maintain its current status without immigration because we simply do not have enough children.”

The EU and Turkey – a relationship in crisis?

There are few issues that put the EU’s identity and self-perception under greater scrutiny than that of its relations with Turkey. The panel with the fairytale title “Three Nuts for President Erdogan” clearly demonstrated how challenging and complex this topic is. Is there a realistic chance of a partnership with the EU or does it remain a fairy tale – this question was covered by an intensive panel that identified controversial points as well as productive perspectives.

Over the course of the discussion, it became clear that the representatives from the two countries (Turkey & Germany) had very divergent perceptions of each other’s countries and their common relationship on certain points. The prominent representative of the Turkish position was Akif Çağatay Kiliç, who sharply criticized the way Turkey is covered in Germany. “Why was there so much coverage of Turkey during the election campaign in Germany?” asked Kiliç critically, adding that people should not rely on Twitter and Instagram for realistic impressions of the current situation.

The participants agreed that, in view of the differences, cooperative projects between the two countries are becoming increasingly important – particularly in connection with educational institutions and civil society.